I’ve spent the last few days (well, longer than that, really) pondering what the exact layout will be for the basement. So here is what it was when I first bought the house: 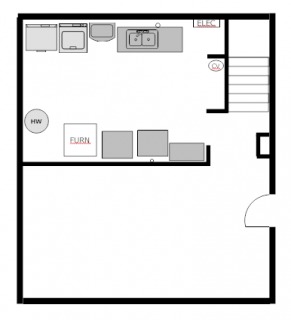 You can see some pictures of it in this post

The old kitchen cabinets, including the old sink, was moved into the laundry room at some point, in addition to the laundry sink already there. Behind the cabinet, a few inches away from the wall, is the main waste water pipe for the house.

I should also point out that there are two ducts running down the middle of the basement (about 6.5′ high) from post, to about 1′ from the bottom of the stairs. Because of the post and low ceiling, I didn’t really think the middle area would be useful to be part of the rec room, so that is why in all designs it is part of the laundry room.

So far I have taken down the all the paneling, the wall and all the cabinets that were in the center of the basement, and moved the duct that comes down at the bottom of the stairs.

My objectives for the basement are to have a laundry room, and a rec room area that I can put my desk in and use as an office, and also put a couch and TV in to use as a place to watch movies/TV. So my first design: 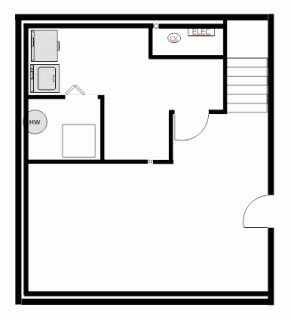 In this (and all designs), I am adding 2″ of rigid foam insulation around the whole basement, and then a 2×4 insulated frame on top of that. This means redoing most of the laundry room plumbing to bring it out from the wall, so moving things around is not a big deal. It also means moving the fuse panel for the same reason, which I don’t mind since I wanted to upgrade it to a breaker panel anyways, and add several new circuits for the basement.

I got thinking about it, and started wondering if I could add a bathroom. The house only has a single bathroom (3 bedrooms) so a second half bath could be quite appealing. I came up with a couple of designs, but I don’t know which I like better yet:

The second design involves moving the electrical panel about 8′ into the laundry room. I still need to check if this passes building code, and also what exactly I am allowed to do with the mains wiring (eg, do I need to get Hydro to come in and run new mains wires from the meter?). It would of course get boxed in.

Both designs also show an on-demand tankless hot water heater (which can be mounted on the wall, out of the way of the furnace filter door). This lets me move the wall about 2′ closer to the furnace, but I haven’t decided if it makes sense to switch to the on-demand heater yet, due to the high cost (I’m guessing ~$1200-$1500 installed). I probably wouldn’t see the energy savings but I may recoup the costs when I sell the house anyways – maybe tankless systems will be in high demand in 5 years. They’re certainly going in almost every house I’ve seen that was built in the last year or so.

So I’d love to hear feedback on which design is better (or if anyone has any other ideas).