I’ve started putting a bunch of Insteon stuff around my house, and one of the things I did is link the garage door to a KeypadLinc. 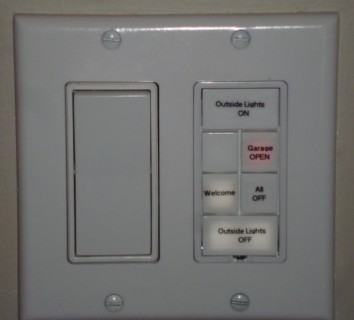 I found a way to set it up using a single button, which I’m posting here mostly for myself in case I ever need to do it again, but maybe it will help something else. A side note: there are many easy-to-find ways to do this with multiple buttons, and I’m sure someone else has figured out my single button way before me and posted on page 46 of some obscure forum thread, but I hate reading those threads (and generally don’t) and you probably do too.

The biggest challenge to making this work is that the KeypadLinc will always toggle its internal state when you press the button: if it’s sending an ‘on’ or ‘off’ command, it will leave the button light on or off afterwards, which means it MAY not reflect the actual state of the door. I have the keypad light on if the door is open, and the sensor only activates when the door is 100% closed. The “trick” I’m using is simple: the door takes time to close, so even though pressing the button toggles the button light to be on, when the door closes later it turns off. The keypad button always sends ‘on’.

The way it works is this:

Install the I/O Linc and Sensor

When closed, the green Sensor light should be on, and when open it should turn off. Make sure you test the door a few times — the next day I found I had to move the sensor about 1⁄4″ closer to make it reliably detect “closed”.

Set the I/O Linc output mode to Momentary Mode A:

This is from the manual:

Now test the door by pressing the set button – it should turn the I/O linc output on for a couple seconds and the door should start moving. Note you need to wait about two seconds between presses for it to see it.

Link the I/O Linc to the KeypadLinc button

That’s it – the Keypad button should turn on when the door opens, and off when it closes.

Link the KeypadLinc button to the I/O Linc

Set the KeypadLinc button to “Always on” mode:

That’s it. The button should now be able to control the door, and the light should indicate the door’s status. I actually have two keypads linked in this way (one by the front door, one in the kitchen) and it’s convenient to see the garage door status. I’ve had this up and going for close to 6 months now and haven’t had any issues.