One thing that has always been awkward about our house is the front entrance. It is about 7′ long by 3.5′ wide with a wall that means even two people trying to get coats/shoes on are in each other’s way. My plan is to knock the wall down and put a half-wall about 3.5′ over to act as a separator but keep the space open. 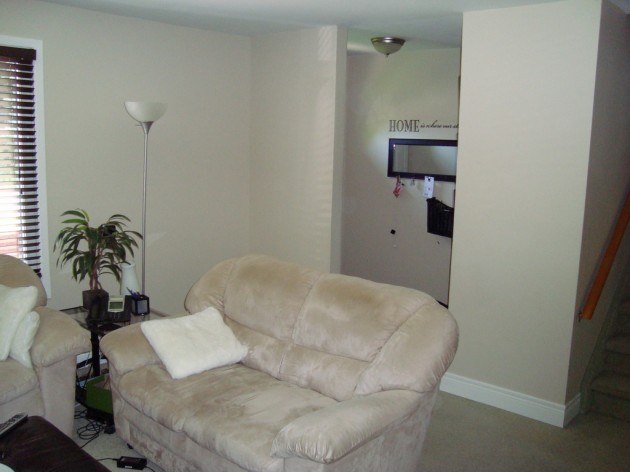 Nearly 4 years ago (yikes), I tore out the carpet in the entrance, but then we couldn’t really decide exactly what to do, other projects got in the way, and so for the last 4 years we’ve lived with just a runner on top of the subfloor and no closet doors. 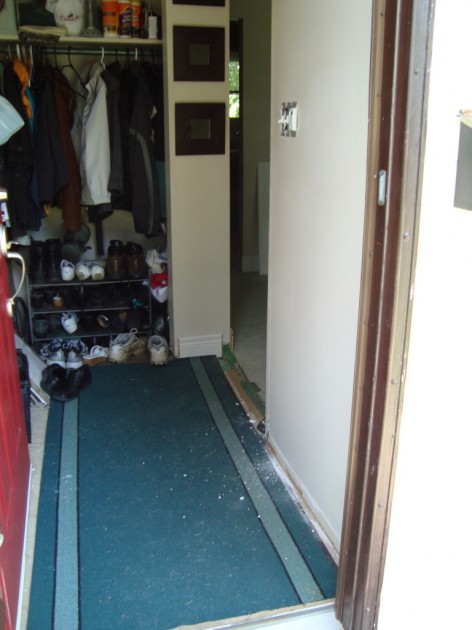 Not exactly the most welcoming view when you first come in. This picture illustrates how tight the space is though. In the living room, we basically use the space behind the couch as the overflow for the front entrance — this is where we put stuff down, and try not to step on the carpet with wet shoes (which is very difficult when you have someone behind you trying to get inside out of the rain/snow). (Note: not present in this photo is a cabinet we had in the corner and a small table that sat behind the couch). 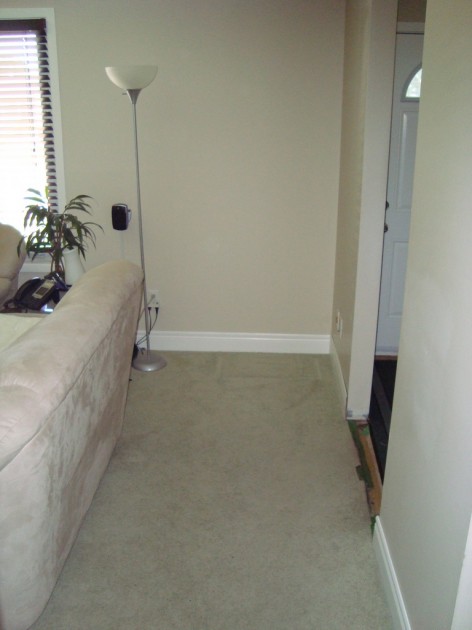 The new wall is going to go roughly where the back of the couch is, and the couch will actually barely move at all. Nothing like knocking a big hole in the wall to get committed.. 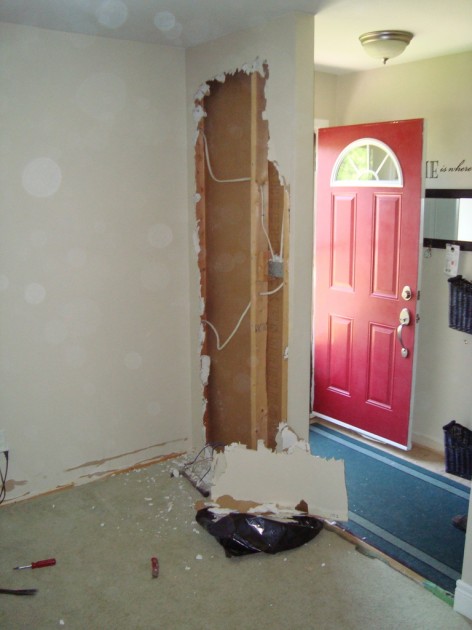 As soon as I had the wall down, it was clear how much nicer this was going to be. When you first walk in the house, it’s spacious and you can actually see the whole living room and dining room right away. 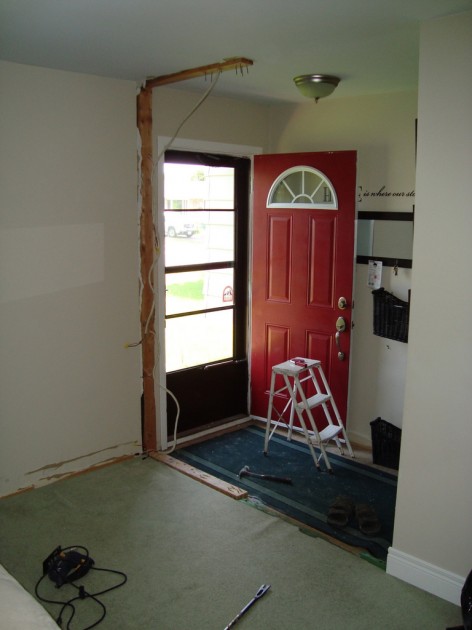 Next, I had to reroute all the electrical. There is a line from the ceiling that is the incoming power as well as switched power to the overhead light, a line to the light outside the front door, and a line to the rest of the plugs in the living room which includes a switched outlet. There were, accordingly, 3 switches in the wall — overhead light, front entrance, and living room lights (via switched outlet). I should also mention that all the original wiring is aluminum, and being a 35 year old house, there are many shared circuits, and this is no exception — this circuit is connected to one of the bedrooms plus another outlet in the master bedroom. I decided that I’d take advantage of the situation to run a new circuit for the living room. I’m going to put two switches beside the front door: for the front porch light and the overhead foyer light, and I’ll put the switch for the living room outlet on the wall connected to the closet (which is between the stairs and the foyer).

Step one is opening the wall. Because there is a vapour barrier behind exterior walls (well, kraft paper in my case) I did not want to cut it. I also do not have a tool for this, as I actually try to avoid doing drywall work as much as I can. I bought one of the rotozip bits, and put it in my Dremel, and then taped a piece of scrap wood to the side to use as a depth gauge to give me 1⁄2″. This was actually really effective and I had the wall opened pretty quickly, and there is only one spot I broke the kraft paper, which will be easy to repair with acoustic caulk later. 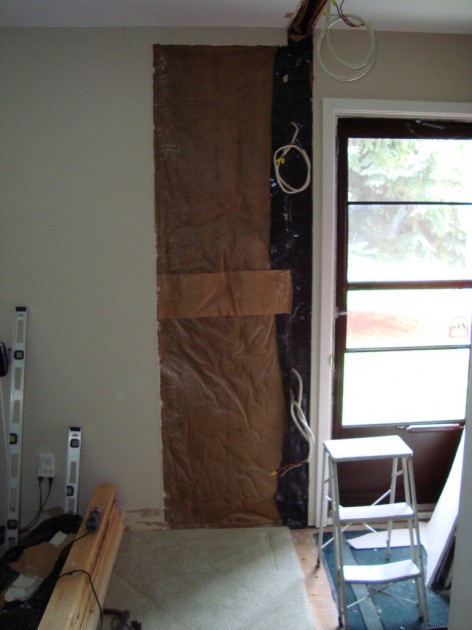 The studs are 24″ O.C. so I cut over top of the middle of the stud so that I’d have something to secure the new drywall to when I was done.

Getting the wire from the ceiling light into the new wall proved to be a fairly big pain. On the door-side of the wall, there is a ceiling joist over top, which that part of the drywall is attached to. On the room side however, a nailing edge was added which was nailed into the top plate from above. A wrecking bar, hammer, and saw eventually got it out, and then I used a cut-off wheel to cut off the nails sticking down. 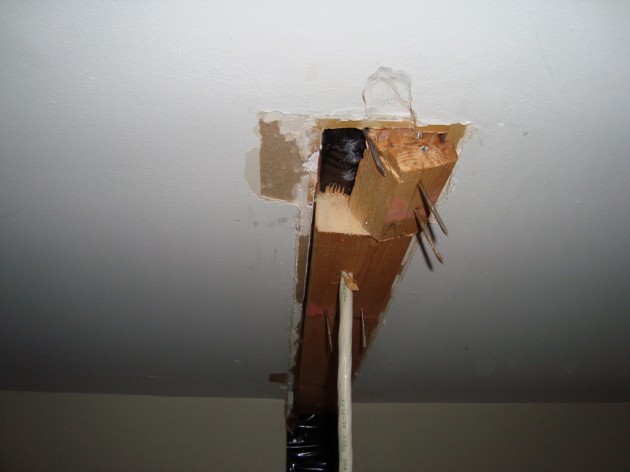 Next, I pushed the wire up between the joist and nailing edge, and sat it up on top of the joist. I drilled a hole on an angle from the wall cavity up to where the old wall used to be, and started trying to fish the wire down. Cutting more of the wall open or finding someone with small hands probably would have made this go much faster, but I got it through.. eventually. 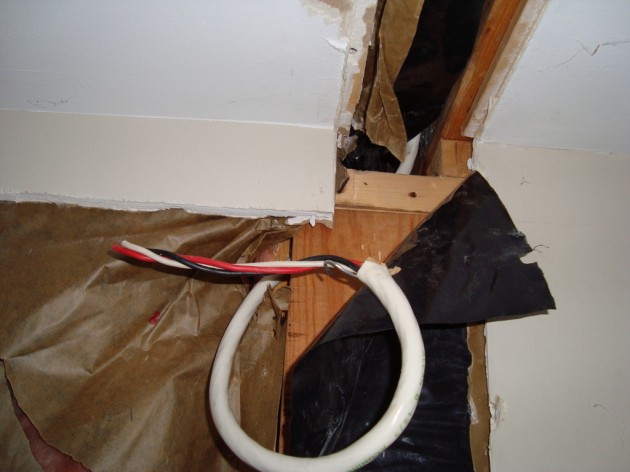 I also ran the wire that goes to the receptacles down into the basement. Since I did spray foam, this meant drilling down would go into the foam. I carefully measured and drilled a hole down into the foam, making sure it wasn’t lined up with a joist below. I then took a coat hanger and made it into a “J” shape, with the bottom cut at an angle so it was somewhat sharp. I pushed this down and out through the foam in order to exactly locate my hole, and then from in the basement used a spade bit to widen the area around it so I could push the wire through. I’ll hook this in later, and foam the in around the hole. 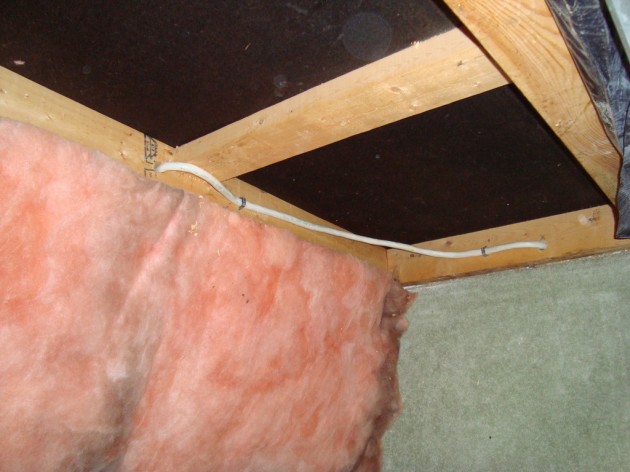 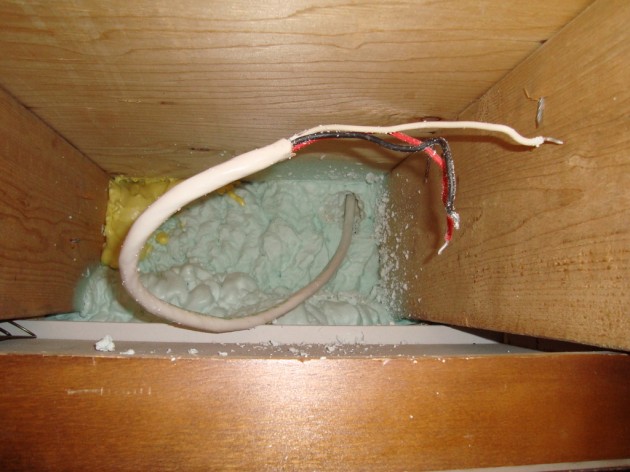 Because the wire from the ceiling light was short (and I didn’t want to go into the attic to rewire this), I added a junction box high up on the wall. I ran a new copper 14⁄3 wire from that to the switch box – this carries the power from the panel, and the red wire is switched to control the foyer light. The outside front light also comes into this box. Many people are afraid of aluminum wiring, but really you just need to follow the correct procedures, which I’ve learned from living in this house: make sure all the fixtures and wire nuts being connected are rated CO/ALR (#63 wire nuts), and of course ensure everything is coated in anti-oxidant goop (“Noalox” is one brand name). Since this is an exterior wall, I’m using gasketed exterior boxes that are air-sealed and made of PVC. The drywall compresses the vapour barrier onto the gasket, and there is also a foam gasket you poke the wires through that keeps them sealed up. 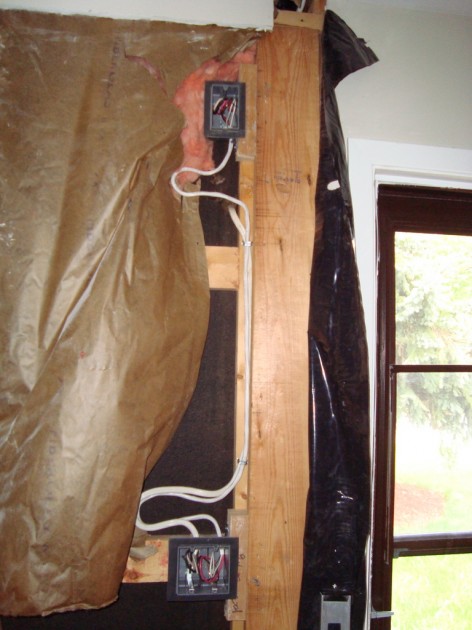 In the next post, there’s a lot to do but I’ll finish everything up.