Since the house has only one bathroom, we decided adding a second half-bath to the basement would be a good investment, as well as a useful addition to us right now.

When we moved in, there was an existing sink in the laundry room, which I’m pretty sure was the old kitchen sink and cabinets. I took this picture after I had taken down several cabinets (I unfortunately did not take very many ‘before’ photos), but there were two big cabinets mounted right above the sink before.

Underneath, the drain line branches towards the wall as you can see, then went out on an angle, for some reason, over to the laundry sink (which is just to the left of the countertop – don’t ask me!), so that by the time it got there, it was probably 6″ away from the wall.

I cut both the drain line and vent line off, leaving enough room to hook into later. 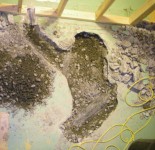 I actually had a plumber do this part. I’m sure I could have done it myself, and smashing up my floor would have been fun, but my thought was smashing a hole through my main sewer line would have been the exact opposite of fun. You can see the main sewer line running at a 45-degree angle off to the corner of the house, and you can also see a smaller branch line which goes to a floor drain in the laundry room. The top left arm of the hole is for the sink drain. Fortunately there was just enough room above the small line in the picture that the new drain can go over top, and still be a bit more than 1″ below the floor.

The next day, the plumber came back and finished running all the pipes. I was actually going to do the supply lines myself (in PEX) but since I don’t own a PEX crimper, I figured it was easier to have the plumber do those lines as well, and it really didn’t cost that much more. My cousin came over a few days later to help cement in the hole. I forgot to take a picture, but we added in a couple ~3′ pieces of rebar to add some strength to the cement and help prevent it from cracking. It’s not the prettiest thing ever, but it is quite flat, and that’s what’s important, since I’m putting a subfloor over it later.

You can also see the new plumbing for the laundry room, including the washer box which is recessed inside the wall, and the hookup for a sink in the laundry room. I’m actually going to be putting in a cabinet and counter-top with a drop-in sink — sort of like what was there before, but.. less ugly. The laundry room is a bit of a weird shape, but the main area is about 10′ x 7′, so space is at a premium and the cabinet/sink combo seems to make more sense than a regular laundry tub.